All companies — large and small — treasure and understand the value of their happiest customers. The number and loyalty of these customers is often the difference between success and failure.

But, how should we deal with angry customers? As a general rule, we should not give up on them until we understand their feelings and try to turn those negative feelings around.

Consider these observations from Vision Critical, which provides a cloud-based customer intelligence platform that allows companies to build engaged, secure communities of customers:

“The value of your happiest customers is well understood, but the influence and potential of angry customers should not be underestimated. On average, Americans tell nearly twice as many people about negative experiences as positive ones, and the anger of the social media-empowered customer can easily go viral and inspire a movement. Of the millions of people who post tweets about customer service every week, 80 percent are negative. All it takes is the right hashtag at the right moment to turn one person’s gripe into a social media maelstrom.”

Take a look at this in-depth white paper from Vision Critical. 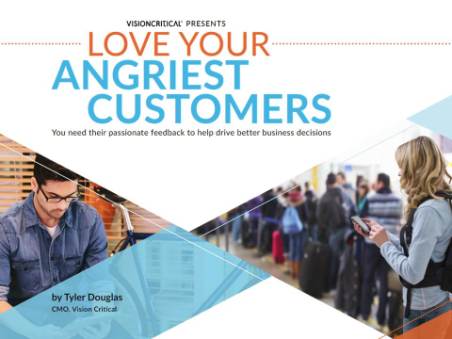 16 Replies to “It’s Not Just About Happy Customers; Angry Customers Matter Too”

Measuring Public Relations Effectiveness
Resume Tips You Can Use