On Thursday, we wrote about the Super Bowl LIII Advertising Game Plan. Of all the brands, only Skittles chose to be a Super Bowl disruptor. And to attack the very essence of advertising. WHILE doing its own advertising.

Though, on the surface, the Skittles’ campaign seems anti-advertising. But is it really? YOU DECIDE.

Should you attack a marketing tool that you use? Skittles’ 2019 Super Bowl advertising campaign says yes. Why? It generates even more attention by the media, especially social media, than a straight ad would.

Here’s the back story, followed by Skittles’ ads for the Super Bowl. As Ann-Christine Diaz reports for Ad Age:

“A new behind-the-scenes music video captures Michael C. Hall [of Dexter fame] and others performing a tune, “Advertising Ruins Everything;” and the lyrics reveal that it will be a satirical exploration of what big game marketing is all about. While the lyrics are scathing, they’re done with a wink—the video cuts in scenes of the cast chomping on Skittles and colorful candy pellets bouncing off the skin of a drum.”

“Along with the tune, Skittles has released the show’s entire original cast recording on Spotify. A second song is titled “This Might Have Been A Bad Idea,” a third is named “This Definitely Was a Bad Idea,” and then there’s an additional four minute-track of Michael C. Hall munching on a bunch of Skittles. Altogether, they give a good outline of the game day show: Hall undergoes a crisis of conscience as he wears a cat costume and questions his whole decision to do this Skittles marketing stunt, contemplating how he may have doomed his entire acting career. His attitude then takes a turn for the positive — perhaps he’ll do the late shows! Win a Tony! Meet the Dalai Lama!” 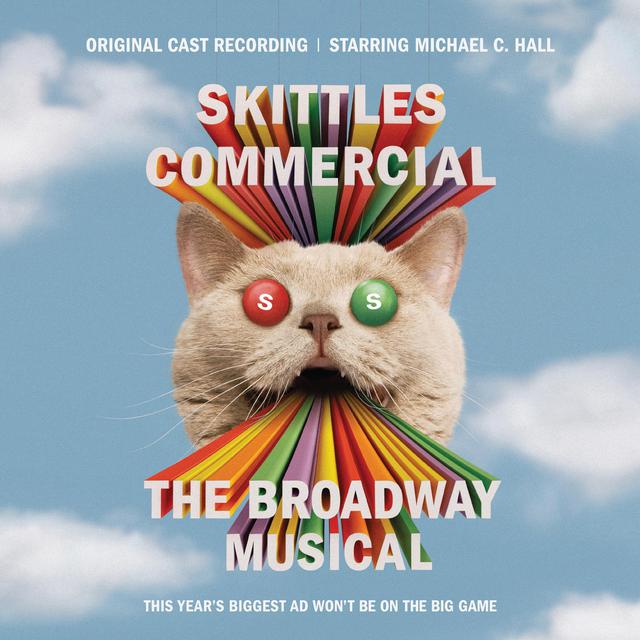